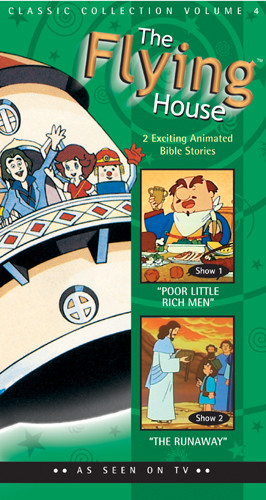 Details
What kind of adventure can three young children find while playing in the forest? For Justin, Angie, and Corky, it's an unusual old house that turns out to be a time machine! In this animated cartoon series, the children, together with friendly Professor Bumble and his robot SIR, are catapulted back in time nearly 2,000 years, and the adventures begin. Trying to return his flying house to the twentieth century, the inept professor keeps setting down in the Holy Land, where the children witness Jesus' teachings firsthand.

In Poor Little Rich Men, the children recount the stories they have heard Jesus tell. Justin talks about how wrong it is to love riches above all else, and Angie relates the parable of the Prodigal Son, whose father forgave him even though the son had acted badly toward him.

In The Runaway, our time-travelers are trapped in time by a "time-revolter." In their struggle to return, they meet Aaron, a young runaway whose only possession is a small knapsack of food. Listening to Jesus, Aaron glimpses the beauty of sharing and sees his meager snack turned into a feast for the whole crowd.