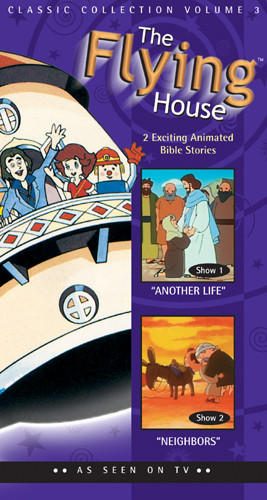 Details
What kind of adventure can three young children find while playing in the forest? For Justin, Angie, and Corky, it's an unusual old house that turns out to be a time machine! In this animated cartoon series, the children, together with friendly Professor Bumble and his robot SIR, are catapulted back in time nearly 2,000 years, and the adventures begin. Trying to return his flying house to the twentieth century, the inept professor keeps setting down in the Holy Land, where the children witness Jesus' teachings firsthand.

In Another Life, the time-travelers free a man named Jairus from prison, to which he had been unjustly sentenced. The children also experience a miracle when Jairus's daughter, who had died while he was in prison, is brought back to life by Jesus.

In Neighbors, Justin, Angie, and Corky get a big lesson in forgiveness and compassion, as Jesus tells them of the Good Samaritan, who helps when others turn away. Later, the kids learn why mercy is important when they meet a mean-hearted merchant who shows no mercy at all.