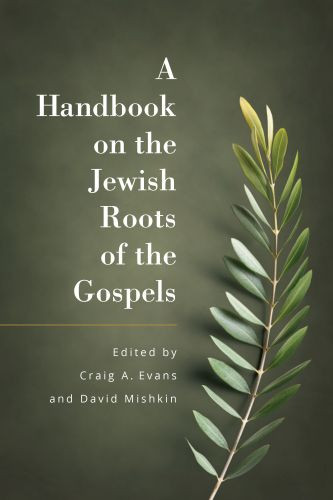 A Handbook on the Jewish Roots of the Gospels - Softcover

Details
Is it even possible to say anything new about Jesus of Nazareth? Disciples and detractors alike have been weighing in for two thousand years. Scholarship in the last fifty years has been greatly enhanced by the recognition of the Jewishness of both the historical Jesus and the life and teachings of the apostle Paul. But the Gospels themselves, the texts that preserve the words and deeds of Jesus, have not been subject to the same level of consideration in this regard. Until now. This book surveys the historical, theological, and practical issues that arise when the Gospels are read as Jewish literature. So yes, there is something new here about Jesus.

The Jewish context of Jesus and his movement is better understood today thanks to archaeology, the ongoing publication of ancient texts, and changes in the way scholars think about Jewish society in late antiquity.

A Handbook on the Jewish Roots of the Gospels, whose contributors are well-known in the field, updates all of the relevant topics relating to Jesus and the Gospels in light of these exciting new developments.

A companion to A Handbook on the Jewish Roots of the Christian Faith (ISBN 9781683071648), the book is split into five sections:Written by an international group of Jewish and Gentile followers of Jesus as Messiah, A Handbook on the Jewish Roots of the Gospels is for all who want to learn more about these four biblical accounts and how they portray the man from Nazareth within his own historic and cultural setting. Contributors include Daniel M. Gurtner, Darrell Bock, Craig A. Evans, Sheila Gyllenberg, Craig L. Blomberg, Eckhard J. Schnabel, Catherine Sider Hamilton, David Mishkin, Mark L. Strauss, Michael L. Brown, and more.
Additional Info
Write Your Own Review