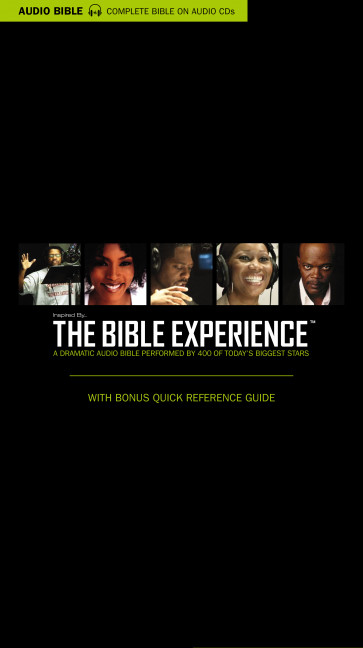 The most ambitious, critically-acclaimed presentation of the Bible ever produced, Inspired By … The Bible Experience features a star-studded cast of almost 400 performers, including 23 Grammy winners, 8 Emmy winners, 5 Golden Globe winners, and 3 Oscar winners.

The Bible Experience includes dramatic performances set to an original musical underscore by the Prague Symphony Orchestra and Hollywood-style sound design created at Technicolor Studios. The Bible Experience has become not just the bestselling audio Bible, but also one of the all-time fastest-selling new Bibles. In addition to record-breaking sales, Inspired By … The Bible Experience has received unprecedented consumer satisfaction and national recognition including numerous five-star reviews, an Audies Audiobook of the Year (the highest honor of the Audio Publisher’s Association), an AudioFile Earphones Award, and a nomination for an NAACP Image Award. The complete Bible features 79 digitally mastered audio CDs, a bonus "making of" DVD, and a convenient carrying case.

The best audio Bible ever!
Truly this is the best audio Bible I've ever listened to. So many seem to be dull or poorly edited. This one comes ALIVE! I'm not a huge fan of the TNIV Bible and wish this came in NLT or even KJV, but it is simply amazing. I love listening to it and even my kids (ages 11 & 13) really enjoy it. It's easy to tell these are not just "readers" but "actors" as they really do seem to make it come alive. The background noise & music does not detract, but makes it more theatrical. Although this is "acting" - the text read aloud is the exact Bible in this version. No "ad libbing" (if you will). I spent my birthday money from my mother on this & am so glad I did. I highly & enthusiastically recommend it! Review by Holly (Posted on 4/23/2018)
A must have
Listen to it everyday in my car, I have to get used to the sound effects, and trying to figure out what voice actor is speaking, but it really helps when different speakers are talking. The excitement in there voice or just the way things and names are pronounced. Review by William (Posted on 1/4/2018)
Five stars!
LOVE love this! Everyone needs this!!!! Review by Stormy (Posted on 11/5/2017)
Fantastic!
Inspired By...The Bible Experience is the most dynamic audio Bible I have encountered. The readings are really dramatic reading performances and also feature music and sound effects. The listening experience really allows the holy text to truly come alive in a vivid way. The pace is a tad slow and sometimes there will be like an entire song played in the middle of the text (they stop reading and start singing) and while this can be fun if you're just trying to listen to the Bible it can also be a bit frustrating. Overall a great product and I highly recommend it! Review by Matthew (Posted on 3/17/2015)
Well done recording
Whole Bible well done recording with just right background music and sound effects. Much easier to listen to a recording than to do all the reading yourself. I can listen to a chapter in one hour verses two days of reading. For the price well worth getting. Review by Max H (Posted on 8/14/2012)
My review
I hesistated on this purchase for probably a year before I decided to purchase the whole set. A multi-voice drammatic reading of the entire Bible is a large and complex project, so they are not free. I already had three recordings of the New Testament, fully drammatized to single voice. And I had one for the Hebrew Bible. Did I really need another? I purchased Genesis through Deuteronomy as single books as I taught through the Pentatech this autumn. It was good enough to convice me to take the plunge. Here's what I got for my money.

Overall, this is an excellent recording. The technical quality is high, recordings are clear, the direct-to-your-mp3-player file format is much more convenient than the cassette tapes and audio CDs I've had in the past (no ripping required!). The TNIV translation is fresh and clear, yet dignified and accurate. It should be: it boasts impressive scholarship behind its rendering of the biblical texts (e.g. Gordon D. Fee for the New Testament).

The one small criticism I might make is that oral interpretation is somewhat uneven. Most of it ranges from good to, well, the word "magisterial" comes to mind. Yes, some of it really is that good. Occasionally, however, a voice seems to leave a drammatic moment flat. Yet for the price--and Amazon's price couldn't be beat--these recordings are probably the deal of the decade. It certainly is one of the best drammatic renderings of the Bible I've ever heard. For many books, it IS the best drammatic reading I've ever heard.

In summary, I need not have hesitated. Buying this set was a very good decision. For those who've never LISTENED to the Bible before, be ready to have your ears opened! From ancient times, this is the way it was intended to be encountered: orally and with flair. I haven't listened to any other Bible recording since this one arrived. Very enjoyable, highly recommende Review by Anonymous (Posted on 1/29/2011)
A must have!
From the moment I popped in the first disc, I fell in love with it. It was more than I expected. The crisp audio adds to the dramatization of the reading of the Bible. Review by RH (Posted on 2/10/2008)

Write Your Own Review